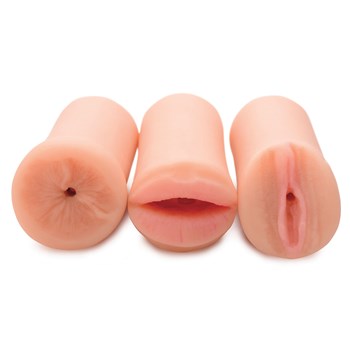 Take Jesse Any Way Want - Front, Back Or Mouth! Each stroker is molded from legendary pornstar Jesse Jane herself! Whatever youre craving, now have Jesse Jane any way you want her with this trio of realistic strokers! 3 stroker set features oral, anal and vaginal entries Each stroker molded from Jesse Janes body Textured tunnel inside each for intense sensations Molded from fleshy, life-like TPR material Each is open-ended for easy cleaning Each stroker is 4 long, 1.4 wide Use with your favorite water based lube Now Jesse Jane is yours, all yours, any time you want! Winner of 28 adult industry awards (and nominated an unbelievable 83 times!), who wouldnt love Jesses seductive mouth, inviting kitty, or tight tail on their love wand? You get all 3, and each one is 4 long, 1.4 wide, cast from Jesse Janes body, and molded in fleshy, lifelike TPR. Each stroker has a textured tunnel inside to draw out every bit of your star-powered happy ending! May we suggest some Jesse Jane movies for your Jesse Jane Three-Way Stroker Set? Two of Jesses best adult movies are available here at Adam & Eve! They are special Adam & Eve co-productions of Pirates DVD and Pirates: Stagnettis Revenge DVD, each the recipient of multiple AVN and industry awards! Pirates, Jesse Jane, and your Jesse Jane Three-Way Stroker Set -- thats some perfect pairings! And the Jesse Jane Three-Way Stroker Set is easy to clean-up, thanks to an open-ended design. When playtime is over, just place under a warm water tap and flush out the inside. Make sure each stroker is thoroughly air-dried inside before storing in a cool, dark, dry place. For best results, and to extend the life of your strokers, never let your sex toys come in contact with each other. The Jesse Jane Three-Way Stroker is recommended for guys whod love a taste of a real porn star where it matters most, on-demand, 24/7. Couples can add these Jesse Jane strokers to foreplay, too!